A beautiful, powerful, intelligent, long-time Christian friend of mine hit a stretch of life and had a string of experiences that torched her religion. Right now, and not surprisingly, she no longer claims, nor wishes to be a Christian. That’s strength and honesty, friends, because the tearing down of lifelong belief systems is painful. (I’m proud of you _____! Don’t stop learning and leaning into healing and truth!) I’m also part of a small group where women are processing the deconstruction of their faith. Some are still believers and some are not, but everybody there has had some integral part of their faith decimated. For many, it’s the recognition of wrong social pressures by our/their elders in the faith.

There’s a lot of things we believe, because we’re told to. Deconstruction is the process of pulling things apart to see if the structure is sound.

I feel pulled between different emotional places and schools of thought right now. There’s cynicism and bitterness directed towards everything/everybody religious… and hope and clingy-ness for everything familiar that make it difficult to be thoughtful and to reason honestly. It’s important to allow this process, though… a faith untested by fire is… well, untested. I feel somewhat threatened by this process, but nothing like my friends. This process is familiar to me, but it’s been a long time and I haven’t delved deeply in many years. My history is so much longer now than it was before… I’ve decided that I need to think it through “out loud,” because I am struggling to process it all.

I deconstructed my religion for the first time when I was in first grade.

I assumed my parents were right, that God was real, that the way we did church was normal and ideal, that my elders were right, and that everything would stay the same. When I was in the first grade (That’s about age 6), my mom spoke up… she disagreed with both doctrinal statements and the unquestionable social norms of the church. My dad didn’t agree with her, but my mom stood her ground. And thus, my parents became spiritually divorced. Everything felt normal in our house, a generally functional, healthy, supportive and loving home, but my parents disagreed on “church” so adamantly that we children attended a church with mom one week and a different church with dad the other week.

Here are some things that I had assumed were truth before the split:
God is real
God is good
The Bible is right
My dad’s church is the right church (If you read the wiki, it’s worth looking at the revision history)
Girls should wear skirts and have long hair in buns
I would grow up and “profess” at church
TVs are bad
Prayer should use specific phrases and words (Such as “thee” and “thou” and “Our Father in heaven.”)

It shook my young world to have my parents disagree about something as integral as the Creator of the universe. Also, anybody not part of my Dad’s church, the Two by Twos, was assumed to be going to Hell. As a child, that bothered me a lot… what kind of God is so ungracious to a child who is questioning the legitimacy of a church for good reasons? And yet, my Dad’s earnest devotion to God and what he believed God wished was compelling.

My parent’s marriage survived but their spiritual separation continued for the entire rest of my childhood and is the backdrop of my early spiritual story and is the reason I am a confident and determined challenger of church beliefs and expectations.

I learned: God is no God if He cannot be challenged.

As a child, I decided that I would throw out all religion and start from scratch. I would read every single book on religion and decide what was right. You laugh, because you know that’s impossible, but I didn’t know that. I began… I read a book my mom published about the Two by Twos and a terrifying book about one man’s escape from demonic power as a leader of some part of the New Age movement. I attempted to read the Bible. I also talked at length with my grandfather, who also left the Two by Twos and who welcomed late night conversations with his small grandchild.

And that’s as far as I got. Nevertheless, I decided a few things:
*The spiritual realm is real. (Meaning, we are more than just physical creatures and there are other creatures and powers that exist beyond the physical realm.)
*We and the universe were created (The math-aware side of me finds evolution to be impossible and the created world too marvelous to just *exist*)
*God cannot be evil and must be good (It seems to me that the original state of the universe is good and that it is degrading… and not the other way around.)
*Because the Two by Twos said it was the ONLY right way and because both my parents believe in God…. the Two by Twos must be wrong.
*God must be strong enough to handle the questions and doubts of His creation.

And then over a few years, I rescinded my decision to study all religions and decided that the Bible was really God’s word.

The Two by Twos do not welcome questions or deviation, though. They demand childlike faith (Not the endless-questioning kind of child! The kind of child that follows trustingly wherever they’re led.) strict adherence to dress code, study and questions only within subject matter that is approved… and strangely, discourages discussion of spiritual topics outside of assigned times. Those people who have a Bible but are not part of the Two by Twos are “lost sheep” and lamented, but not chased, though if repentant, you can be “welcomed back into the fold.” Other churches are wrong and people there are not Christian and are going to Hell.

Naturally for me, a child Christian born of questioning parents, I began wearing pants most of the time and pierced my ears, not so much as a rebellion (okay, it was a rebellion) as to make a statement that I was confident of my salvation even though my Dad and my Dad’s church believed I was lost. I stood on my own faith from a very young age and it didn’t match my parents’. 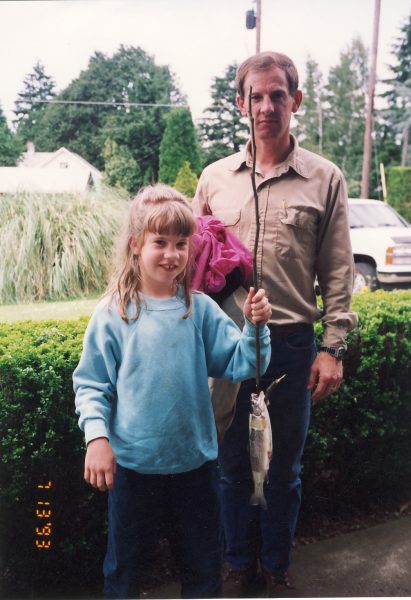 A happy childhood, but an intense child.

My mom eventually gave up on going to church (and on reading her Bible as I learned later) though I could find my dad studying his Bible every morning, writing in his tiny handwriting. The way my parents made space for me to find my own way was appreciated. Watching my dad with his Bible was endearing. But finding a belief system or church was challenging. In my teens sometime, I began going to church every other week with my friend’s family. I also went to some youth groups irregularly. As soon as I could drive and I was released from the requirement to attend the Two by Twos, I drove myself to church every Sunday, attending a church that my friend’s family went to.

I hopped into a new fire there! 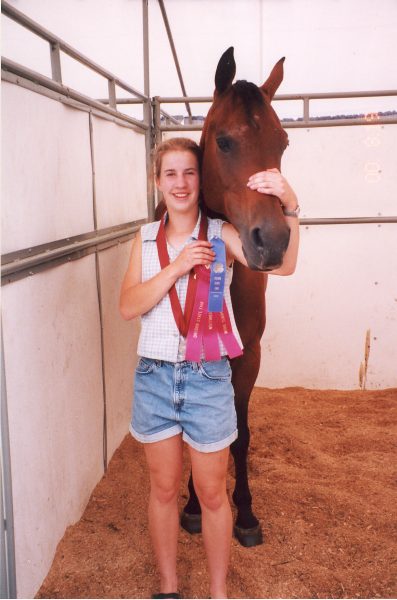 My parents allowed me to become a successful horseman!

I spent my teens attending Household of Faith in Gresham, OR… the church pastored by the father of Joshua Harris, author of I Kissed Dating Goodbye. It was a large-to-me church of primarily homeschooling families. I learned a whole new set of social norms here that I assumed my parents agreed with (though I learned later that they didn’t). My questioning was not squashed here, but always, everybody assumed I would agree with them if I just studied it the way they did. They believed in predestination and I think all of the Calvinistic beliefs. They valued children such that small families got an eyebrow raised at them. They supported homeschooling so well that they excluded the validity of any other schooling option. Dating was sinful as well as any physical connection between interested parties. Courtship was the only way to go. Parents played a huge role in their older children’s lives.

And….. I went without my parents. I drove myself. I sat with my friend’s family.

And that meant that I was “other” somehow. Again. Didn’t fit in. Too independent.

At social events, I was excluded by my peers. Eventually, as I began to enter adulthood, my “Sunday family” even refused contact with me any more and wouldn’t let me spend time with their daughter any more, never you mind that their daughter was also entering adulthood! (I won’t get into this story here, but we eventually invited that daughter to move in with us against her parents wishes in order to make the transition to adulthood.)

I can’t remember when I realized that Household of Faith was unhealthy. I can’t remember when I stopped attending. But I still carry built into me, feelings of righteous judgement and deep-set shame for anything in myself or others that deviates from the image they built of what is a good Christian. I was soaked in the modesty culture, courtship culture, etc. etc.

I exited my childhood with a strong faith in God being good, in God being real, and in the Bible being truth… but without a faith community that supported me. Instead, I had been a part of multiple communities that looked sadly, patronizingly, and disappointedly down at me, imperfect and lost and (alas!) unfit. I was rejected. I was not a lost sheep. I was a blemished/faulty sheep. It was and is a deep wound and I resent/ed it. Bitterness has been a tenacious root that I continually deal with. And I developed a deep distrust of faith leaders who claim to have found the best way. That seems smart. Also, when a preacher says something that I disagree with, I run away and don’t want to hear another sermon. That is not a healthy response.

But time went on. My story continued. I still believed that I could find a church community. The Bible preaches grace. And hope. And the concept of each believer being a part of a body… the head is Christ and we are all loving and caring parts of the body. And we are not designed to be cut off from the body of Christ. So I didn’t give up. Surely, we could find a church that could love us, even if it wasn’t perfect.

My boyfriend/fiance/husband was part of a very small church that welcomed and loved me until the day I began dating Brian. Both he and I were challenged when we started dating… his reputation was stained and I was rejected. We continued going to his family’s church every other Sunday while we attended a small, broken church of broken people on the off weeks. We were openly accepted and welcomed at that small country church. Also, my parents supported and welcomed my relationship with Brian. They knew a good thing when they saw it! Brian’s parents were openly against our relationship, because they didn’t believe I was good enough for him and they thought he should complete his college education before we married.

We persisted. We rejected the rules that had constrained us and caused us to be unsuccessful socially. We separated ourselves from our parents (in many ways, not completely), married and started a home together. We learned how to budget, work, go to school, make house, etc. We were poor and didn’t know it. I don’t remember if we were still going to church, but I think we were still driving way down from Portland, OR to Colton, OR to worship and learn with Timber Valley Church. (Hello Timber Valley friends!) We were tired and busy like only young people can sustain! 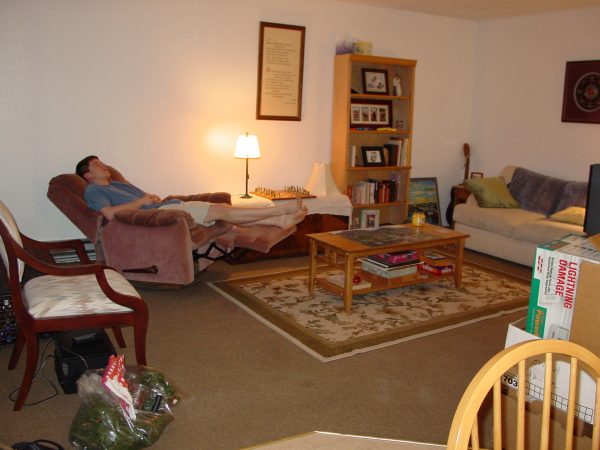